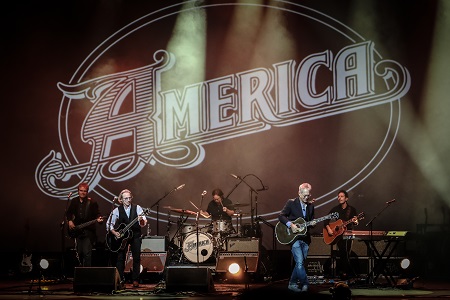 On their in-progress 50th anniversary world tour, the iconic multi-platinum-selling group AMERICA are delivering their distinctive brand of harmony-rich rock, mixed with pop smarts, in soul-searching classic songs that movingly reflect the times in which they were written. The band’s co-founders GERRY BECKLEY and DEWEY BUNNELL are committed to keeping their songs and music fresh onstage every night as they perform all over the world. In the Q&A below, they talk about their special chemistry; pick their favorite scenes in TV shows where their songs have been featured; and recall crazy “Spinal Tap” moments in their career.

10 QUESTIONS
WITH GERRY BECKLEY AND DEWEY BUNNELL
OF AMERICA:

Congratulations on your 50th anniversary tour. Looking back, what has surprised you most in your career?

GERRY BECKLEY: “As great as any of the singular successes have been over the years, I’d have to say the longevity itself is something we’d never have considered and probably the greatest surprise.”

DEWEY BUNNELL: “The initial success was a surprise, with the first album and single both going to #1, but I don’t think we ever thought that 50 years later we’d still be performing close to 100 shows a year!”

Every band seems to have a “Spinal Tap” moment. What about AMERICA?

DEWEY: “We’ve had several over the decades, but I’ll never forget when we were taping a Bob Hope Special on the UCLA campus with Bob, John Wayne and Aretha Franklin in front of a large crowd of students who assumed we were performing live, when in fact we were lip-syncing ‘Sister Golden Hair.’ As the taping was in progress, there was a technical problem, so they stopped the tape to restart the shoot. The students were shocked and voiced their displeasure at this reality! We made it clear we’d return for a full LIVE CONCERT soon…which we did!”

GERRY: “I’d say there’s been many ‘Spinal Tap’ moments over the years but a particular Hollywood Bowl Symphony performance comes to mind. It was a symphony show with George Martin conducting, and the finalé involved quite a large amount of pyrotechnics. Unfortunately, some of the sparks fell down over the orchestra and the dress of the lady playing the harp caught on fire. She went running offstage in the middle of the encore and fortunately was OK although obviously quite shaken.”

Many of AMERICA’s classic songs reflected the times in which they were created, such as the questing “Horse With No Name” (with its environmental message at the end); the frank romantic politics of “Sister Golden Hair”; and the war paranoia of “Sandman” (written in part from conversations with returning airmen from Vietnam). What was it like to be artists experiencing all of this and capturing it in your songs?

GERRY: “We’ve been fortunate over the years to have numerous hits that became reflections of their time.”

DEWEY: “We’re all influenced by the times we live in and the changes we go through growing up. It’s a special thing to be able to reflect those events in a song in some way or another.”

AMERICA’s recordings have been licensed for a multitude of placements in films (including American Hustle, The Nice Guys, The Last Unicorn and Girl Most Likely), television shows (among them The Sopranos, Friends, Breaking Bad and Saturday Night Live) and video games (including Grand Theft Auto). Why do you think AMERICA’s songs lend themselves so well to scenes in films and TV shows…and is there a favorite scene you have where your song is used?

DEWEY: “I loved hearing ‘Horse With No Name’ being used in an episode of ‘Breaking Bad’ as Walter White was literally driving through the desert! Many times our songs seem to be simply used to establish the era of the 70’s, but the directors must have their reasons.”

GERRY: “My personal favorite is an episode of ‘The Sopranos’ where one of the characters was taken out (shot) while driving and as the car came crashing to a stop, ‘Sister Golden Hair’ was playing on the car radio. Excellent.”

You guys have a special chemistry with different vocal styles and different lyrical points of view. Can you talk about why the combination works and what the “secret” might be in your “sauce”?

GERRY: “We’ve often said that Dewey writes the outdoor songs and I write the indoor songs. It makes for a nice combo.”

DEWEY: “It’s hard to define exactly what we each bring to the table, but I think Gerry and I have always written from the heart and complement each other’s ‘strengths and weaknesses’ in the process of writing, recording and performing.”

If you were to record a duet with a current artist outside the genre of music you’re known for, who might that be, and which song would you cover and why?

DEWEY: “I’ve always been a ‘one band’ guy. I truly don’t aspire to collaborating with artists outside America, which is my comfort zone, although I admire may other artists from the past and present.”

GERRY: “I’ve been friends with Brandon Flowers of The Killers for a while now and I was recently just listening to their hit ‘Human.’ That’s a song I’d love to cover.”

Which famous American historical event would you like to have witnessed and why?

GERRY: “I’m not great with crowds but I would have loved to witness the inauguration of President Obama. A shining moment in our country’s history.”

DEWEY: “I can only imagine what went through the minds of the people at the signing of the Declaration of Independence in 1776. To be there with the likes of Thomas Jefferson, Benjamin Franklin and John Adams at the beginning of the creation of our democracy must have been incredible.”

What do you look forward to most when you return home from touring, and where is home?

DEWEY: “Of course, there is ‘no place like home’ wherever that may be. Reuniting with my wife and pets, even after short trips, is always a comfort. Whether it’s in L.A. or northern Wisconsin, where we split our time, it’s always great to come home.”

GERRY: “Well, the best part IS the coming home. My wife and I have two lovely homes, one in Sydney, Australia and the other in Venice, CA.”

If you overheard one fan talking to another after leaving a show of yours, what would you like to hear them say about the gig?

Figurative gun to your head, what is your favorite album of all time and why does it capture your imagination?

DEWEY: “I’d have to say ‘Pet Sounds.’ I was at first baffled by what I was hearing the first time I heard it as a big Beach Boys fan. But after repeated listens I was, and still am, amazed by the beautiful songwriting and incredible production of Brian Wilson. It truly is a masterpiece in every way.”