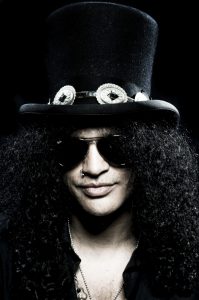 Here’s a Q&A with SLASH where he talks about heading out on the road with Ozzy; what fans can expect on the road; shooting the steamy clip “Beautiful Dangerous” with Fergie; and what surprises him most about his career so far.

Q: You and Ozzy have been friends for a long time, he sang one of the songs here on your album: “Crucify The Dead,” which you wrote together along with Kevin Churko.  You’re also going on tour with him in early 2011, which will mark the first official arena tour on this album cycle.  Can you talk about your anticipation of these shows?

SLASH: “We have done a bunch of arenas, but this will be the first arena tour straight. The thing I am looking forward to most is just working with Ozzy. I have done a lot of gigs with him and we see each other a lot here and there, but to just do a tour with Ozzy, I am looking forward it. Being in a sort of day-after-day arena setting will be interesting. All things considered, I show up and we go for it; I have no definitive expectations on this. I just know it will be a blast. Our band did 8 months of touring earlier this year, all the way up until October, so we have the whole rig basically together. For the tour with Ozzy, we are changing some songs out and bringing some new songs in.”

Q: Tell us about the song selection for the upcoming tour…what is the balance you are looking to achieve?

SLASH: “We do a lot of songs from the new record just because it was so well-received and then we play a certain selection of Guns N’ Roses songs and a little bit Velvet Revolver stuff and even a couple Snakepit songs. We’re probably playing from 50 minutes to an hour on this run with Ozzy.  We sort of have to squeeze all in, so I will take the highlights of the whole thing and put it all together.”

Q: For your current single “Beautiful Dangerous,” you teamed up with Fergie of Black Eyed Peas. What do you feel she added as a vocalist to the song?

SLASH: “Fergie’s style and demeanor is a raw and sexy kinda thing, and that is what I was looking for in the song. I thought of her automatically because I’d worked with her before and knew she had a certain rock element with a certain kind of easy charm that nobody was familiar with coming from her.”

Q: The video with Fergie is provocative–she slips you a roofie–and it contains some steamy romance scenes.  Can you describe the chemistry between the two of you in this video?

SLASH: “Fergie and I’ve been friends for awhile now and have a kinship personality-wise so when I was thinking about doing a video, I called her up and told her we needed a concept and she came back immediately wanting to play an “over- zealous stalker fan.” I just knew what she was talking about and I know she knew GNR back in the day plus I know she has a perspective on that whole rock-star trip and the kind of fans that become really obsessive. We threw the concept together and she basically ran the show as far as her character. She came out and went for it, like bam “this is me, I am going to be this” and I of course was going to play myself. It looks steamy, but it was just our vision of what that situation would look like. It was an easy shoot–she is very professional and I would like to think I am professional. We got through a two-location shoot in one day. “

Q: What has surprised you most in your career so far?

SLASH: “All things considered, a day doesn’t go by where I don’t get surprised by something.  I love playing music as much as if not more so than I did when I was 19; that compared to most of my peers is pretty surprising. I wake up every day and get really excited about doing stuff that I have been doing for the last 30 years. I just love it.”