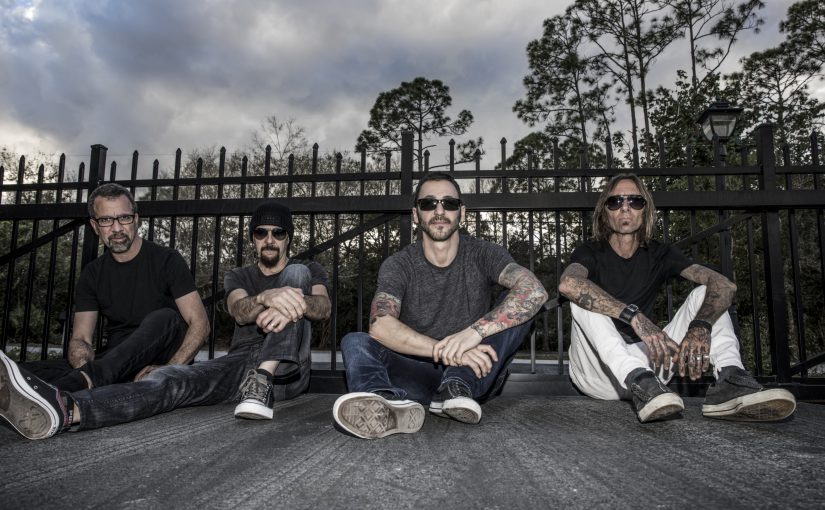 TALKS ABOUT THE BAND’S NEW ALBUM

GODSMACK lead vocalist/guitarist Sully Erna talks about WHEN LEGENDS RISE, Godsmack’s first album in four years, due out April 27 via BMG and marking their debut on the label. The new album comes 20 years after the release of their debut album and 20 million album sales later, Godsmack are an even stronger animal than before.  The album’s newly released single, “Bulletproof,” shows the band–Sully Erna [vocals, guitar], Tony Rombola [guitar], Robbie Merrill [bass], and Shannon Larkin [drums]–doubling down on their combination of tightly wound riffs, rhythmic fury, naked emotions and pushed-to-the-edge vocals, all fired up with melodic precision and tight songcraft.

This summer GODSMACK and SHINEDOWN will co-headline a six-week outdoor amphitheater tour of more than 30 cities.  These dates come in support of the new album. For more information on Godsmack, visit the band’s website.

Q:  Congrats on the album which you produced with Erik Ron at The Godsmack headquarters in Derry, New Hampshire.  It’s sonically intense and layered. What was your mindset in writing this collection of songs?

SULLY ERNA (SE):  “It was just about evolving as a songwriter and stretching my wings out even further to use all the experiences I’ve had with writing different types of music over the years and applying that to find a way to introduce a newer fresher more mature sound, but still maintaining the power of Godsmack.  And expanding the fan base was a key motivator for me in this process.”

Q:  What inspired the song and album title When Legends Rise?

SE:  “The band and our journey.  It’s been an amazing road we have traveled through all the ups and downs.  But being able to conquer those challenging times with alcohol and egos and everything else that can tear a band apart is what we are the most proud of.  To be able to stand strong again and do it better than we ever have.  It’s about burning it down and building it back up.  It’s the Phoenix rising from the ashes!”

Q:  The first single is “Bulletproof.” What triggered the emotion of this song?

SE:  “I always write about things that have affected me on an emotional level. I think everyone knows that about me by now.  But if I choose to do that, I have to be prepared to be honest and vulnerable. And so the challenge is figuring out how “exposed” you want to be with personal information.  But I’ve also learned over the years that for me, being transparent, even to the point of embarrassment sometimes, is so much better than holding it inside and extending that pain longer than you need to.  ‘Bulletproof’ is just another moment in my life when I allowed myself to be vulnerable and got hurt.  It’s this kind of carelessness from other people that  eventually hardens you and forces you to put up that wall to protect yourself.  So when and if they circle back around and try to get back in, you make yourself bulletproof.”

Q:  The song “Unforgettable” is a powerful anthem, with a massive sound. Can you talk about the song’s sentiment and the production, with the backing vocals?

SE:  “It’s my favorite on the record.  It’s epic, it’s anthemic, and it’s very melodic and catchy!  And thanks to an organization I work with called C.A.T.S. (Community alliance for teen safety) that focuses on helping young kids stay on the right path, I invited a bunch of kids from the DERRY Middle Schools of New Hampshire to sing with me which I feel really brought this song over the top! They were incredible and the song is Unforgettable!!”

Q:  The ballad “Under Your Scars” has strings, what inspired this?

SE:  “I come from a very broad background in music.  My great uncle was a famous composer in Sicily, and my dad is still a musician and runs an Italian band in the Boston area.  So as I’ve grown over the years as an artist, I’ve regressed back to ALL TYPES of music and instruments I love working with and composing. So I called upon my dear friend Irina Chirkova to lay down the cello parts and Zvezdelina Haltakova (both from Bulgaria) did all the violin parts for me.  And I really feel that this specific track will be something people will gravitate towards since it’s the first real ballad we’ve put on a godsmack record.  I think like it or not, they will gravitate towards it to explore it out of curiosity.  But again, it’s about taking risks and expanding.”

Q:  Can you talk about the band’s overall chemistry and their playing on this album?

SE:  “The band is doing better now mentally, physically and emotionally as a unit than ever.  These guys are always there to just work and deliver the best record we can make. And even when I’m in control of writing a record,  I always bring them the arrangements in a basic raw form so they can add their own personal touches to it and feel as proud and attached to these songs as I do.”

Q:  What pisses you off these days–and what makes you happy?

SE:  “Nothing pisses me off anymore. Honestly.  I have completely eliminated all dramatic and negative people from my life two years ago.  It was a very hard and challenging decision to make. As some of these people were very VERY close to me.  But I couldn’t carry their crosses anymore and needed to move on. Which is really the theme that runs through this entire record.  It’s about growing, changing, and living life to its fullest. With no regrets and no hesitations.  I have so much to be thankful for and I want to live the rest of my life enjoying everything I have built over the years and spending as much time as I can with this amazing support team of family and friends that I have around me.  I want to continue to have fun and entertain all our fans by delivering the best music and biggest tours that we can for them. Because that’s really the reward for us in the end. And ‘THAT’ makes me happy!”

Q:  What is your mindset for touring in 2018, noting you have a new album to share with audiences?

SE:  “This couldn’t be more excited and energetic about the new album. We really believe this could be a great moment in this bands career and we plan on running on the road until at least fall of 2019 minimal.”

Q:  What are your thoughts about touring with Shinedown and how do you feel they enhance the bill? Do you share any history with them on the road?

SE:  “We love the guys in Shinedown and we all go way back. There is a very strong mutual respect between our camps and we feel that this tour is going to be a must see!  We’re preparing ourselves to be on the top of our game!”