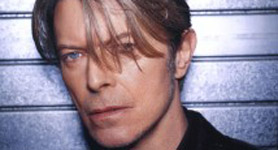 Q: You said Reality was made to play live and the songs from Reality on this live CD are certainly evidence of that. Was it your intention to make that kind of record because you knew you wanted to tour it, or did you just set out to make something rockier and more up than the previous album, Heathen?

Midway during the recording period it dawned on me that a lot of the songs were pretty up in spirit even if the lyrics were a little down in some. By the time we got to tour rehearsals the Reality album as a whole seemed to fit right in.

Q: What were you hoping to convey with the Reality album title and tour name, and was that notion reflected in the album sleeve graphics where you were depicted in cartoon form among seemingly disparate elements?

Back in 2003 the word reality seemed like it was going to sum up the decade. And of course reality never is what you think it’s going to be.

Q: Does it ever bother you that the deeper meaning of some of your work might go unnoticed, or are you happy that as long as at least a handful of people get it, you’ve succeeded? This is in reference not only to the meanings behind some of the songs themselves but even album cover designs such as Reality and Heathen?

There are no deeper meanings anywhere as far as I can hear. Maybe I missed something.

Q: For somebody who had previously expressed a low boredom threshold when it came to touring, you made a very convincing job of having a complete blast on what, in terms of individual dates at least, became the longest tour of your career so far. What was it that changed to give you the mental stamina to undergo such a commitment…not to mention the physical stamina such a grueling schedule must have demanded?

Increasing the set list to over fifty songs was a big help. In fact I think it was near sixty. I physically worked out fairly consistently throughout the tour and just the general support from our band and audiences was tremendous, just made each night seem like a beginning.

Q: On stage during the first Dublin show you said: “If we’re going to film a DVD anywhere, this is the place to do it.” Do you have an emotional attachment to Dublin?

I love Dublin. It’s small, manageable, a great walking city. Back in my teens I got drunk there, more recently I interviewed Tracy Emin there, now that’s completing a circle of some kind. Self revelation and epiphany are the currency in that town.

Q: Your band leader, Local boy Gerry Leonard, taught you a few appropriate phrases such as “Our day will come” in Gaeilge. Were you being mischievous when you said it at the start of each of the Dublin shows or did you have a genuine interest in the politics of Ireland?

I just said whatever Gerry told me to.

Q: The audience in Dublin was among the very best and most receptive audiences on the tour, but certain numbers created hugely emotional moments wherever you played. It was clear that you were also moved by the reaction to songs such as “Life On Mars?,” “The Loneliest Guy,” “Heroes,” “All The Young Dudes,” and “Five Years.” How does it feel for a performer at moments like that when songs such as “Life On Mars?” receive a standing ovation in the way that they did in Dublin?

As the audience was already standing up, a standing ovation may be over egging the cake but yes it’s great that so many of those songs mean that much to people.

Q: Fifty plus songs were rehearsed for A Reality Tour, with thirty five of those being played over the two nights in Dublin. Though you could have easily picked two or three completely different sets of fifty songs from your back catalogue, which no doubt would have equally pleased your audience, how did you go about choosing the songs you eventually settled upon?

Every few days or so I’d look back through my old songs and pick on something that particularly caught my fancy or something that I hadn’t played in a few years.

Q: What is the title for the piece of music you wrote for the intro animation you recorded with the band?

It didn’t have a title, it was just referred to as the jam.

Q: The stage set for A Reality Tour was possibly the most ambitious since The Glass Spider Tour, without being at all intrusive, and it also made for some of the most memorable visual elements since the Diamond Dogs shows thirty years earlier. Did you enjoy being able to make more of the various platforms the set provided?

My favourite element was having the trees onstage. Everytime I went near them I felt I was getting lost. It was strange, not at all reassuring.

Q: You clearly have a head for heights, but were there ever any scary moments as you made your way along the platforms in the darkness to the edge of the stage?

Q: Aside from being particularly beautiful and very effective as a stage setting, did the white upside down trees have any significance or meaning beyond that?

Well, they were haunted so that might have meant something to someone.

Q: Along with Jimmy King, your wardrobe man, you assembled a very cool collection of clothing for the tour via Deth Killers of Bushwick and Lichen of NYC. What was your personal favourite of the different outfits you wore on the tour?

The bathrobe after the show.

Q: You were pictured on the front of the A Reality Tour DVD, and on tour posters, playing a white Supro Dual Tone fitted with a Bigsby vibrato. What’s the story behind the guitar for those that haven’t heard it before and did it actually make it onto the Reality album?

It was played on the Reality album. It was the same cheap brand and model used by link ray on the tune ‘Rumble’, one of the greatest rock instrumentals ever. Adding a bigsby to the guitar was sacrilege but that’s how I roll, dude.

Q: Some of your more recent compositions performed on this tour, such as “The Motel,” “Heathen (The Rays),” “Slip Away,” and “The Loneliest Guy,” sit very comfortably alongside the older Bowie classics. Do you know this as you write and record them or is it something you really have no idea about until you start getting reactions to them?

I never know about anything until a few weeks after I’ve recorded something. I usually know the strength of a song by then. I rarely need a reaction to know what a songs worth is even if the reaction isn’t there, it doesn’t reduce the song in my mind.

Q: You have a hugely loyal audience that have been with you since the days of your earliest success, but you’ve picked up additions to this hardcore following over the years, and it seems each new generation that dares to search a little further than what they’re being spoon-fed falls under your spell. Are you ever surprised by this respect for you and your music even from those too young to have ever had the chance to see you live?

Just to have an audience turn up at all is quite enough. They don’t really have to like all of the songs, I’m fine with them just being there.

Q: This thirty three track CD is a fitting document of A Reality Tour. But having listened back to it yourself, is there anything that strikes you about it or the tour in particular that perhaps you hadn’t noticed at the time?