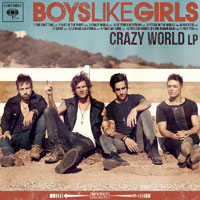 The lead vocalist and songwriter of the multi platinum pop-rock band talks about their new EP and forthcoming album in this Q&A.

Q: What lead to your decision to release “Be Your Everything” as the lead single for “Crazy World?”

We felt this song was the best bridge between the first two Boys Like Girls records and Crazy World. This was the song people were reacting to on first listen and that is very important. We wanted the best way to open the door to the whole album.

Q: It’s been nearly three years since new BLG music has been released.  You took time away from your band mates and traveled to Nashville. What changes during this time inspired the new musical direction?

When it was first time to make a new BLG record, the musical climate was pretty scary–radio programmers were asking for mixes of songs with no guitars, and bands were getting phased out of pop culture; we made a record that felt a little contrived and threw it out. It took some searching and writing music just to write–writing with no intention of what the song was for or whether it was going to be on any specific record. To collect the right songs for this album, I had to break outside the box of our previous releases and the pressure of what I thought our fans want to hear to write something that felt honest.

Q: “Be Your Everything” is such an emotional, raw and vulnerable song. You’ve said that the only time you really express yourself is in your music. Seems this can be a scary thought since your music is constantly being critiqued and there’s pressure to produce hits. How do you push the pressure aside and allow yourself to just be real in your music?

I’ve been writing songs since I was seven; it’s what I love to do. There was a time where I was really scared of what people thought, and that made me lose the plotline a little. The best songs come when I don’t put them in a box as Boys Like Girls songs. Writing with a bunch of other artists and working on other projects these past few years has helped a lot with letting go of the pressure. I’m starting to let myself just have fun crafting something that just feels good and real, then detaching and trying to stay out of the results. So much of success and what goes into a “hit” has nothing to do with the songwriting. I can only obsess so much or I’ll go insane.

Q: You’ve penned songs for some the biggest names in the business. What’s the difference between writing for BLG and for others? Do you take the same approach?

Every song is its own beast. There are songs on this record that were not intended to be for Boys Like Girls that I fell in love with after the fact and just had to keep them. There is an “it factor” to songwriting that I can’t really explain–you walk into a room with a buddy, cowriter, or another artist and a few hours later after 3 cups of coffee you end up with a song. Maybe it’s good, maybe it’s not, but there’s magic in those few hours that’s hard to explain. It’s like blacking out–you never know what’s gonna happen.

Q: BLG broke onto the scene when you were just 19 years old; how does the new LP “Crazy World” reflect your growth and the band’s evolution since gaining notoriety in 2006?

I think there’s a lot of commentary on this record about how much the world has changed even in just those 6 years. I think there is a noticeable difference in the dynamics as well–when I was 18 I just wanted to hear a wall of guitars and huge choruses that I could sing really high. I guess we’ve settled down and aren’t trying to attack the listener quite as much.