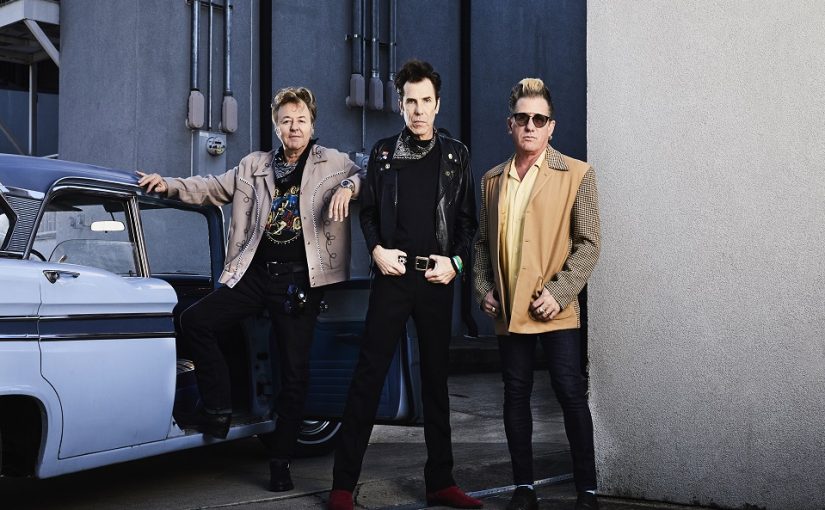 
TALK ABOUT
NEW LIVE ALBUM
‘ROCKED THIS TOWN: FROM LA TO LONDON’ 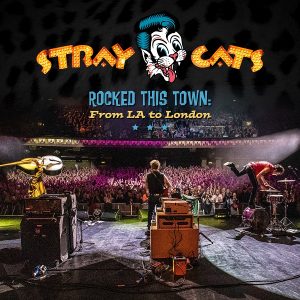 With the fall 2020 (Friday, September 11) release of their live album ROCKED THIS TOWN: FROM LA TO LONDON, original founding members of the iconic American rock and roll trio guitarist/vocalist Brian Setzer, upright bass player Lee Rocker and drummer Slim Jim Phantom took some time to discuss the collection.  Available via Surfdog Records and distributed by BMG (CD, vinyl, digital), this collection of 23 tracks recorded during the band’s critically acclaimed 40th Anniversary Tour in 2019 combines their unparalleled virtuosity and red-hot rock & roll spirit, all raw and completely live–the way it was played on sweaty stages around the world.  The album’s career-spanning track listing (below) features their greatest hits as well as several brand-new scorchers from last year’s 40, the band’s first new album in 26 years.

THE STRAY CATS:
Q&A
WITH BRIAN SETZER, LEE ROCKER AND SLIM JIM PHANTOM
ABOUT THEIR NEW ALBUM
‘ROCKED THIS TOWN: FROM LA TO LONDON’

You guys know how to capture lightning in a bottle, and the audiences are with you the whole way. What’s the secret to delivering a great Stray Cats show?

BRIAN: The first thing I noticed last summer was that we had spread out on stage.  I guess over the years, as the crowds got bigger, we spread out more.  I discovered we needed to be close together like we were still playing in our garages.  That really brought the band back together. As long as we’re within an ear-shot and eye-shot of each, the magic just happens.

LEE: The secret of the Stray Cats is that every time we hit the stage, it’s with 110% laser focus. Brian, Jim and I challenge each other every night to raise the bar and rock harder!

JIM: The secret of a great Cats show is keeping it rocking and relaxed all at once which is the hardest thing for any band to do, especially in a fast-paced musical style like rockabilly where there’s a fine line between being wild and rocking and being out of control. We’ve done so many shows and know each other so well as musicians that everyone is on the same wavelength with knowing when to let it loose and when to hold it back just a little–that’s what makes any band good. As a band you need to steer the audience and keep them with you all at once–you can’t just go out there and wear everybody out right away!

The track selection on the album adds up to a greatest hits collection and a whole lot more. How do you feel it represents the legacy of The Stray Cats?

BRIAN: Even after a two-and-a half month tour, we barely made a scratch in the amount of cities that you can visit.  I feel we definitely needed a live album so that people who couldn’t make our shows could get to experience a Stray Cats show.  I realized that besides the songs from our new album 40, people were singing along with practically every song.  This represented to me that the Stray Cats were much more than hit records.  We had created life-long fans.

LEE: This live record really captures what we are about. It’s our best songs played with sweat, passion and attitude. It’s the soundtrack of my life.

JIM: We opened the show with “Cat Fight” which is a new song–that sets the tone right away that this is not just some oldies, greatest hits gig. We felt it was very important to have new songs for the tour, and then to open the show with a brand new one is a pretty bad ass move if you ask me–everybody knows the hits are coming, the fun is how you get there.

40 years on, what have you guys learned about each other musically? The band’s chemistry is undeniable, as this live album proves.

BRIAN: Stray Cats play with a lot of dynamics.  This comes from watching each other and listening to each other play onstage.  This can only come from a band that has been together for a long time.  And from guys who grew up on the same block.  I love playing with the boys, and you’ll love listening to this album.

LEE: The Stray Cats are ALL about the chemistry between us. Every night it’s different, every time we hit the stage and play “Rock This Town” or “Stray Cat Strut.” It’s different and unique. It’s the magic, it’s the secret, it’s what make us the Stray Cats.

JIM: Personally, I keep learning how good the other two are! They play so well and I get to listen to it every night–I’m still super into it! We’ve spent a big chunk of our lives doing music together, going back 40 years and if you count Lee and I practicing just the bass and drums back in the garage in Massapequa [Long Island, New York] since the 8th grade, it’s even more time than that. We had an undeniable chemistry immediately way back then, and we’ve really embraced it and worked on it so that by now, it just comes out that way! 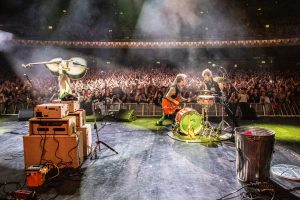 About The STRAY CATS:
The STRAY CATS, the band that put Rockabilly music back on the record charts in the early ’80s, scored several big hits on both sides of the Atlantic thanks to a striking visual 1950’s style brought “up to date” with exaggerated pompadours and colorful tattoos and as well as genuine musical chops that evoked the best players of rockabilly’s original heyday. Formed by guitarist/vocalist Brian Setzer, upright bass player Lee Rocker and drummer Slim Jim Phantom in the Long Island town of Massapequa, NY, in 1979, the trio shared a love for Rockabilly music.  After banging around New York for a few months, in the summer of 1980, and seeing a pompadoured kid on the cover of UK magazine NME, they hopped a plane to London where a rockabilly revival movement was just beginning to emerge. Their massive hits and videos include “Runaway Boys,” “Rock This Town,” “Stray Cat Strut” “(She’s) Sexy + 17,” and “I Won’t Stand in Your Way.”